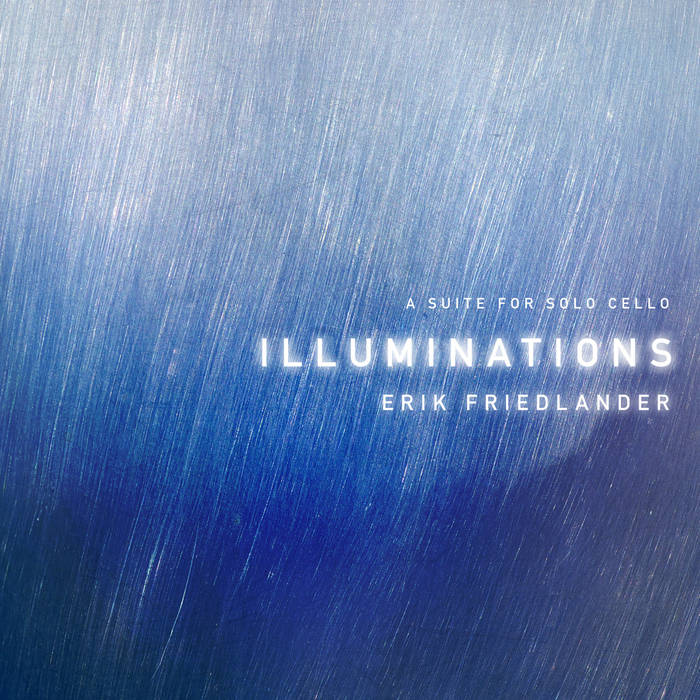 An encounter with ancient books sparks the imagination of cellist Erik Friedlander in his latest solo release.


“I found myself in this darkened room surrounded by these gorgeous books and manuscripts that seemed to be talking to me. They were telling me a story of patience and craft, ritual and dedication that was inspiring.”

Friedlander has worked on the Bach suites throughout his life as a cellist and he used the suite form as a launching point for ILLUMINATIONS. Friedlander begins the suite with the meditative Invocation. The Prelude (subtitled Scriptorium) that follows is a furious moto perpetuo with an improvisatory pizzicato interlude. “I was inspired by Bach’s Preludes which are technically challenging and musically formidable. Scriptorium is a serious place where work gets done. Scribes sometimes spent their entire lives working in this room.” Instead of the French dances most often used in the Bach suites (Allemande, Courante, Bouree, and Gigue) Friedlander chose instead to compose using vocal forms, Chants and Madrigals as well as dances of his own choosing: Cham is a hypnotic, trance-like piece named for the mystical Tibetan dance; the Tarantella is a ⅞ dance of madness named for the infamous serpent who tempts Eve; a Fantasia is a free, improvisational meditation and Kaddish is a mourner’s prayer. The suite finishes with Pavan, a dedication to Hildegard von Bingen, the 12th century mystic and composer.

ILLUMINATIONS weaves inspirations from ancient book making with ritual dance movements and Renaissance vocal forms. The listener may sometimes feel they are hearing a lute or a gamba.
Says Friedlander, “I’m always trying to tell a story with my playing and in ILLUMINATIONS it’s all about a world that’s lit by candles and has the smell of leather and parchment.”

Cellist Erik Friedlander is a composer, an improviser, and a veteran of NYC's Downtown scene. Friedlander started studying music at an early age, beginning at 5 with guitar, and then at 8, cello lessons. Erik spent his twenties honing his skills as a player and an improviser and quickly became a sought after studio musician, performing on 100s of cds. New work continues with The Mountain Goats and John Zorn. Friedlander's recent projects are diverse: Nighthawks, a cd that was conceived during the blackout in lower Manhattan caused by Hurricane Sandy. Claws & Wings, the elegiac work dedicated to Erik’s late wife, featuring laptop percussionist Ikue Mori and pianist Sylvie Courvoisier; and a limited edition LP with photographer Mitch Epstein entitled American Power.